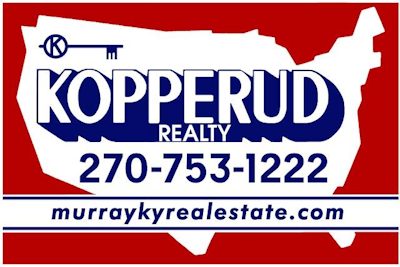 Murray is the largest town in the Kentucky Lake area with over 18,000 residents.  Murray is about 15 minutes from Kenlake State Park.   Many lake-based businesses have a Murray address, even though that may not be in the city of Murray.

Major highways in Calloway County include US Highway 641 and Kentucky 80.  The Murray/Calloway County Airport, also known as Kyle-Oakley Field, is a general aviation airport which has served the area for decades.  Featuring one 6200 foot runway (6200' x 100'), the airport handles small to medium-sized aircraft.  The airport also features fuel, hangars, a localizer, new runway lights, passenger terminal, an automated weather station, and much more.

Calloway County has the highest number of residents in the Kentucky Lake Area with 39,000 people calling it home.  Due to the large student population of Murray State University, the average age of Calloway County residents is significantly lower than the national average.

Murray is one of the fastest growing communities in Kentucky and is the commercial capital of the Kentucky Lake area.  The city has numerous restaurants and hotels as well as year-around events.

Murray has this region's greatest education asset in Murray State University.  Not only does the county offer an excellent university, it also contains two outstanding school systems.  With numerous libraries and museums, Murray is an educational leader in the region.

Murray State University is a nationally accredited, four-year school that was founded in 1922 with just over 200 students as a teacher's college.  Now MSU offers seven academic colleges of study including Science, Engineering and Technology, Agriculture, Nursing and Health Professions, Continuing Education, Business, Education and Human Services, Humanities and Fine Arts for the 10,000 students enrolled.

MSU's main campus is situated on 258 beautiful acres in the heart of Murray.  MSU also has campuses in Paducah, Hopkinsville, Madisonville, and Fort Campbell.  The institution also boasts national rankings in the highly-accredited US News and World Report:  America's Best Colleges.

Murray is home of the largest pubic hospital in the lakes area, the Murray/Calloway County Hospital.  Serving the west Kentucky and northwest Tennessee region for over 100 years, MCCH is a 378-bed facility with over 75 physicians representing 26 medical specialties.

Murray's accreditations include the Joint Commission on Accreditation of Healthcare Organizations, the Kentucky Health Facilities and Health Services, the American Association of Blood Banks, and the Kentucky Department of Health and Human Services.

The City of Murray has a mayor and 12 elected members on the City Council.  There are zoning regulations in the city limits, established by the seven-member, mayor-appointed, Murray Planning Commission.

Hazel is Calloway County's only other incorporated city.  This small town located on the Kentucky/Tennessee border has a mayor and four commissioners.