It is not a secret that large populations of Asian Carp are found in Kentucky Lake and Lake Barkley. There are several different kinds of Asian Carp, but the most abundant in our lakes are Bighead Carp and Silver Carp.

What Are Asian Carp? 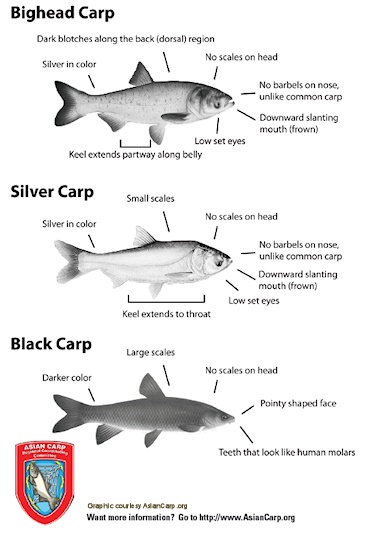 Earning the title of "injurious wildlife," there is an all-out war on these fish to contain, control, and, if possible, eradicate them from U.S. waters all together.  Federally regulated, it is illegal to import, export, or transport Asian Carp between states without a permit.

Grass Carp were the first to be introduced into the United States in 1963 by the U.S. Fish and Wildlife Service (USFWS). They were used in controlling aquatic weeds and phytoplankton in aquaculture.  The move proved to be successful, and over the next decade federal agencies and universities encouraged the spawning and stocking of grass carp.

It was seen as a biological triumph to discover a non-chemical solution for the weed issue in fisheries.

The first accidental release of the carp into the wild occurred at a USFWS lab in Stuttgart, Arkansas. Only six years after that initial accident, Grass Carp were present in 16 states, as well as established in the Mississippi River System.

A non-reproductive version of the Grass Carp (referred to as a "Triploid Grass Carp") strictly monitored by the USFWS is still used for weed control today.

Grass Carp can eat up to 100 percent of their body weight in plant matter a day.  They can reach 59 inches in length, 99 pounds, and can live over 20 years.  Grass Carp only digest about half their food, excreting the other half as waste, aiding in the growth of algae blooms.

Black Carp feed on small invertebrates, snails, and mussels, can weigh up to 71 pounds, and measure up to 59 inches long.  They were brought in unknowingly in shipments of imported Grass Carp. Although Black Carp have not "officially" been established in the U.S., they pose the greatest threat to the Great Lakes area.

Sighted in the Gulf Coast, Missouri, and Illinois, officials worry that if they were to make it into the Great Lakes, the already much-threatened mollusk population would be wiped out.

Bighead Carp, also introduced for algae control in fisheries and sewage treatment plants in the early 1970s, were found in open waters by the early 1980s.  Preferring zooplankton (tiny aquatic animals) for food over phytoplankton (tiny aquatic plants, namely algae) dampened their success in aquaculture and increased their damaging effects in open waters.  During the mid-1990s, they experienced a population boom, crowding out native fish such as the bigmouth buffalo and shad, who also feed on zooplankton. Bighead can weigh up to 100 pounds and measure up to 60 inches in length.

Silver Carp, the fastest growing of the group and the most prevalent in Kentucky and Barkley Lakes, can weigh up to 110 pounds and measure up to 39 inches long. Known for their ability to launch themselves up out of the water, the fish can "fly" up to 10 feet in the air when startled by boat motors.

Skiing in waters where Silver Carp are prevalent can be dangerous, and some injuries involving broken bones have occurred.  Isolated reports of damage has also been caused by the fish colliding with boats themselves, resulting in broken equipment.  Feeding mostly on algae, Silver Carp compete with larval fish and mussels, who need the same food to survive.

Not to be confused with the bottom-feeding, barb-faced, Common Carp, Asian carp are entirely different.

Although Common Carp are also a nuisance, they don't hold a candle to the enormous (and enormously hungry) Asian Carp that are wiping out plants and zooplankton, wreaking havoc on the food chain and thus entire ecosystems.

Why Should We Care About Asian Carp?

Asian carp have no natural predators. Some females are able to produce one million eggs annually. This, combined with the fact that they feed on the bottom of the food chain, poses tremendous threats to native fish and the economies depending on those fish.

The problem became apparent in 1999 when the Mississippi River flooded. After a flood, it is normal to see dead fish washed up on the banks. After this flood, however, thousands of dead fish were found, and all of them were Silver Carp.

Although Asian Carp were originally only found in the southern part of the Mississippi, they quickly traveled north to the Kentucky Lake area.  The Illinois Natural History Survey speculates that bighead (and possibly silver and grass carp) is doubling in number every year.

Catching carp is not as simple as baiting a hook and casting a line.  Because carp feed on tiny animals or plants, they can't be caught in the traditional way.  Netting and even the poison rotenone have been deployed in efforts to capture the troublesome fish, but neither of these methods has proven successful.

Another problem lies with what to do with the carp once they are caught.  People don't want to eat them, so even if they were caught and processed, Americans don't seem to be excited about seeing Asian Carp on restaurant menus any time soon. 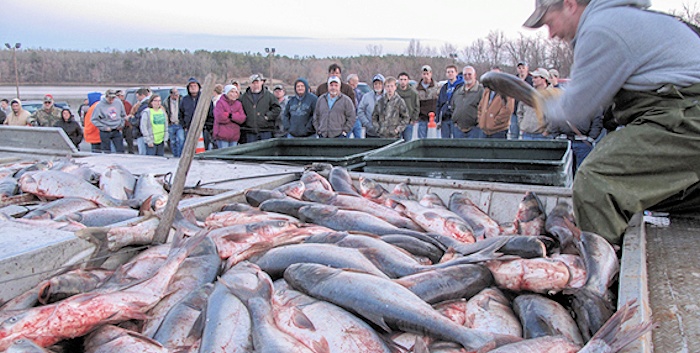 Boatloads of Asian Carp and very tired fisherman tossing them one at a time were the common scene during the second day of Carp Madness, a two-day fishing tournament at Kentucky Lake & Lake Barkley in March 2013. Courtesy Kentucky Department of Fish & Wildlife.

There are those exploring other, more creative solutions to the carp problem.  The Kentucky Department of Fish and Wildlife Resources (KDFWR) sponsored the first-ever Asian carp fishing tournament in the nation, called "Carp Madness", in March 2013.  The two-day tournament yielded over 40 tons of carp.

Another tournament sponsored in June 2018 called "Carp Madness II: Bowfishing Edition" saw 10 tons of carp harvested by 81 boats.  Thousands of dollars of prize money was offered during the event. Other carp tournaments have sprung up and down Kentucky Lake and Lake Barkley.

The KDFWR has a crew in western Kentucky dedicated to efforts of eradicating aquatic nuisance species and Asian Carp.

According to the KDFWR's website, this crew along with others in the state will "head state efforts to assess movement habits of the carps using sonic telemetry, they annually are assessing carp abundance relative to other fish species in the Ohio River, and they are on the water every week with a goal of removing every Asian carp they can find."

The KDFWR goes on to say "KDFWR is leading efforts to begin testing harvest methodologies and new sound and pheromone technologies developed by the USGS that will help us and the commercial industry harvest more fish. Our goal is to find ways to enhance Asian carp processing businesses; our most important resource concerning large-scale removal of these invasive fish."

Researchers are planning to experiment with a riverbed bubbler and sound system to attempt to slow the spread of Asian Carp.  This project was recently announced for the Cumberland River below Barkley Dam as an environmentally-friendly way to block passage of Asian Carp upstream.  You can read more about the project here.

Another approach to the carp problem has come through an attempt to give the fish some good "PR". A name change has been suggested to glamourize the fish in hopes it will entice diners to order.  How about some "Silverfin" or "Shanghai Bass" as your main course this evening?

According to the U.S. Department of Agriculture, the fish have a wonderful texture and, despite being a bit on the bony side, they are relatively easy to prepare.  They are a white fish, and because they are filter feeders they don't have the muddy taste that accompanies bottom feeders.  They are also low in fat and contaminants.

Asian Carp Have Not Destroyed Kentucky Lake and Lake Barkley

Rumors of Kentucky Lake and Lake Barkley's demise as fisheries have been greatly exaggerated. No doubt Asian Carp have certainly made an impact on fishing, but to listen to some, one might think the lakes are a vast wasteland.

While the Asian Carp issue must continue to be dealt with, anglers in the meantime may need to change some of their old habits that once brought them fortune.  Instead of throwing in the towel, putting up your tackle for good, or moving away to another lake forever, try some new tactics.  Hire a fishing guide and learn new ways of catching those slabs.

As with everything in life, you have to adapt and evolve.  But the fight to rid Asian Carp will remain.