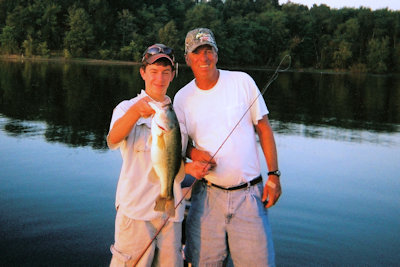 Dave with one of his clients, Luke, on a previous guiding trip.

Bass fishing guide Dave Stewart has been leading trips on Kentucky Lake and Lake Barkley for 23 years, so he knows that having a good fishing day on those lakes by and large does not happen by accident or chance.

It’s ironic then, that the events that led to Stewart’s two-decade career as the helm of Bass Buster Guide Service and one of bass fishing’s leading experts were all just one “accident” after another.

After retiring from the military in 1995 after 26 years of active duty and facing life as a civilian for the first time since childhood, Stewart found himself a bit adrift.

“When I realized with the initial shock of leaving my military family of which I had been a part of for so many years that I needed to take some time to relax and assess what I wanted to do with the remainder of my working life, I decided to go fishing for a while,” he recalls.

As luck would have it, a motor home on Kentucky Lake awaited him--a hideaway he’d purchased a few years prior to help maximize his time off, a perfect place for a man who was pondering the future.

While he fished and took time to relax from a lifetime of rigorous discipline, Stewart played around on the Internet, where he found that the burgeoning World Wide Web offered limited resources and little information for bass fishermen.

“Back in those days there were very few internet sites that were devoted to fishing, as well as very few anglers that were taking advantage of this new technology which opened a whole new world of information to them,” he remembers.

A seasoned fisherman might say that the “conditions were just right” for Stewart to catch an opportunity. The more he engaged online with other fishermen, the more site administrators started noticing his vast knowledge about the sport and the lakes on which he lived. Before long, he was providing regular fishing reports for several sites. Then, the fish started biting one after another—in other words, the phone started ringing.

“At the same time that I was getting a reputation on the Internet as a local knowledge person here on the lakes, I was gaining a reputation at the resort as someone that was a good bass angler,” he says.

“The owner of the resort started relying on me for information to give his clients staying there so they could have successful bass fishing during their stays there, and even to the point that the owner started to request from me that I go out with some of the guests that were struggling to catch bass and show them what they needed to do to put some fish in the boat.”

His younger brother set Stewart up with a website for his fishing guide service and before he knew it, he was booking trips seven days a week, which left him little incentive or time left for pondering what to do next with his life.

“I guess you could say that a new career found me more so than I found a new career because I certainly was not intentionally trying to start a career as a full-time bass guide,” he says.

Not only has he guided or led well over 4,000 fishing trips, but he has shared his wisdom of the sport through regular fishing reports for various websites and off-water classes, most notably his class “Eliminating Water,” which teaches fishermen the tricky art of finding bass and making decisions prior to and during a trip to help guarantee their success.

“The amount of fishing knowledge within the six inches between his ears is unreal,” says Peyton Porter, a junior on the Murray State University Bass Anglers Team.

“My history on Kentucky Lake is, I would say, very respectable and it’s because of who I learned from,” he says.

“Dave put his time and effort in for me.”

“He cared enough to make me good. And he made me good.”

For Porter, the many trips he spent on the water with Stewart were more opportunity to learn what he believes is the fundamental difference between him and other guides.

“What sets Dave aside from your other guides on the lake that are everyday fisherman is his knowledge about fishing and his attitude towards it,” he says.

“He doesn’t teach you spots. I’ve never learned a spot from Dave. It’s about finding out why the fish are there and then following the fish.”

“That’s the most advantageous thing to learning with Dave.”

“Dave is all about teaching--he wants people to learn when they’re out there, not just to catch fish, but to learn how to go back out and do it again without him in the boat,” she says.

“A lot of the guides I know, they’ll just show you some spots and say ‘Fish this place and fish this way,’ but Dave explains why you are fishing where you are and how you should fish it and if conditions change, how you should change to fit the conditions in order to still catch the fish.”

“He’s so much about teaching and people having a really good time out there on the water with him.”

Despite being a Kentucky Lake resident for her entire life, Warner says she still never fishes the lake in a Ladies’ Bass Anglers Association Pro Bass Tour that she doesn’t consult with Stewart before.

For professional bass anglers, Stewart’s method is a clear route toward bass tournament glory. Porter says it led to his various titles—Warner to her tour championship in 2013 and her continued record for the largest sack weight in one day.

But for hobby fishermen like George White, the Stewart method is valuable for another reason entirely.

“If you’re just an average joe like me who takes time off to go down to Kentucky Lake and fish, where do you start?”

“My success rate with Kentucky was very bad until I hooked up with Dave Stewart.”

“Dave’s ideas were about how to figure out where to start before you ever get down there, and then once you’re down there, how to eliminate water after you’ve started.”

“My fishing experience went up five-fold by talking with Dave, taking his classes and learning from him.”

Not only, says White, has his fishing game improved because of Stewart, but also has his life.

“He’s the absolute best person to know and I don’t meant that just from what he knows, but from the person he is,” White says.

“If you hire Dave a few times, he’s your friend for life--that’s who he is.”

“He’s probably one of the most helpful people I’ve ever met as far as just being that person.”

As Stewart prepares to hang up his guiding hat this year in favor of retirement, the transition, quite unlike the one that brought him here, is one he’s not leaving up to chance.

Battling Stage IV cancer for the past five years has taken its toll on the angler and he aims now to spend his time on land with the ones that he loves.

“I am doing ok now but this is a fight that I know I will eventually lose,” he says of his disease.

“My plans are to continue this fight for as long as the Lord allows me, and use my time now to spend more time with my wife, sons, grandchildren and great-grandchildren.”

The discipline, tenacity of spirit and determination that has led to his success on the water for the past two decades, Stewart now plans to put into practice fighting his disease.

“I am determined to show my family that I still have a lot of fight in me and that I am not going to lay down and give up,” he says.

A message of gratitude from Dave

I owe my success here as a bass guide to so many good people and wish I could thank them all personally. First, all the great clients I have had the pleasure of sharing my boat with over the years, especially those that booked with me every year time and time again, all of my sponsors over the years that have supported my guide service including but not limited to: Jet-A-Marina in Calvert City, who not only took so good care of me but also took care of my clients with their great service and sales departments, Fisherman's Headquarters Tackle Shop in Draffenville, Charmer Baits, Pro Tungstein, Last Cast Jigs, Slong's Lures and the many other sponsors I have had over the past 23 years. Most of all, my wife Rebecca that has endured all the long hours, promises of vacations rarely taken as well as personal time with me because I was too busy working seven days a week. 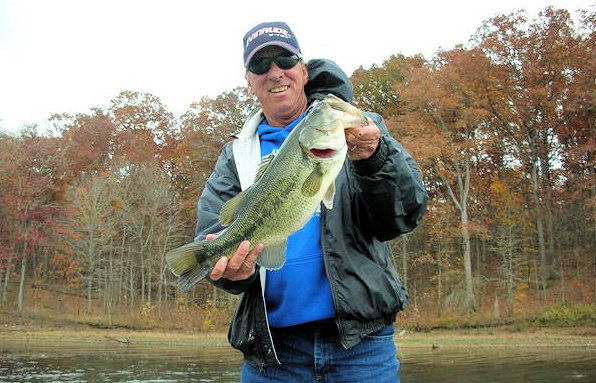