Sunsets like this are common at Kentucky Lake. Wouldn't you want to experience this?

Kentucky Lake is the 25th largest lake in the United States, and the seventh largest as far as man-made lakes are concerned.  The surface area covers 250 square miles, or just over 160,000 acres, stretching 184 miles from Gilbertsville, Kentucky to Pickwick Dam in Tennessee.  It is the largest body of water between the Great Lakes and the Gulf of Mexico.

The lake was created by the damming of the Tennessee River at Gilbertsville in 1944.  Kentucky Dam, constructed by the Tennessee Valley Authority, is the longest dam in the TVA system at 8,422 feet.

The Tennessee River, with it's pool level at 302 feet above sea level near the dam, was raised to a summer pool level of 359', creating a depth of more than 70 feet in the channel when Kentucky Dam's gates were first shut on August 30, 1944. The lake, in some places, spans two miles in width.  The vastness of Kentucky Lake creates plenty of space for recreational boaters and anglers alike. 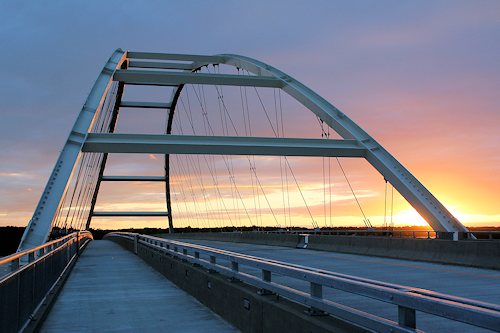 Fisherman will enjoy a good largemouth bass population which is a popular target in the spring, summer and fall months.  Anglers also love to catch crappie, in which the lake has an abundance.  Bluegill and redear sunfish are a popular species in the spring months.  And there's always many yellow bass to catch, which creates a fun environment for kids and novice anglers.  Fishing guides are available for hire for those wanting to familiarize themselves with Kentucky Lake.

Recreation boaters enjoy Kentucky Lake not only due to its enormous size, but also because it's part of the Great Loop, a waterway circling the eastern United States.  Whether it be on houseboats, cruisers, or wave runners, pleasure boaters are sure to find Kentucky Lake a wonderful experience.

There are several dozen places to stay on Kentucky Lake.  Traditional cabins and cottages are a popular choice among vacationers.  Several campgrounds dot the lake's landscape with full hookups and other amenities.  Dozens of vacation rentals by owner are available, many of which are on the water's edge.  There are also several inexpensive hotels and motels, both on the water and offshore, in which you can choose.

How big is Kentucky Lake?

How long is Kentucky Lake?

When was Kentucky Lake created?

The Beginning with the Flood of 1937

In 1937 a terrible flood struck the Tennessee and Ohio Valleys. The flood caused devastation to communities, farms, and families, causing some to temporary relocate. The following year, in 1938, five years after the Tennessee Valley Authority was created, TVA told people living on the banks of the Tennessee River in Kentucky that they would have to relocate once again.  Only this time, it was permanent.

Prior to the Flood of 1937, area communities and leaders were lobbying for a dam to be constructed at Aurora as early as the 1920s.  In fact, Kentucky Dam was almost built at Aurora.  Can you imagine if that had happened?  However, Gilbertsville was picked over Aurora (and Birmingham, KY) because the geology of the area was better.

The dam was started in 1938 and was completed in 1944. It began holding back the waters of the Tennessee River.  Slowly the river flooded its banks and crept higher and higher. Now, the flooded Tennessee River, known as Kentucky Lake, stands about 55 feet higher than the original river.

When Kentucky Lake was created back during World War II, many farms, homes, towns, roads, and railroads had to be relocated. The most notable community to be affected was Birmingham. Roads that were affected include US 62, US 68, US 79 and several others.

Remains of bridges stick out of the waters near Paris Landing. These use to carry US 79 prior to the early 1940s.

Railroads relocated include the Illinois Central (now Paducah & Louisville Railroad) and the now-abandoned Louisville & Nashville. The current of Kentucky Lake have now wiped out many of the remnants of roads and foundations, but you can see an old railroad line in this photograph at right from space courtesy of the US Geological Survey taken in late 1998.

Using Google Maps' aerial photography as well as Bing's "birds eye" view, you can explore many remnants that can be found under the water or along the shores of Kentucky Lake and Lake Barkley.  An example from Bing's Maps is below.  Here you can see remnants of US 79 near the Paris Landing State Park Golf Course.