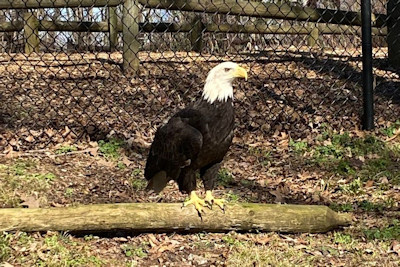 A rescued female bald eagle has found her new home at the Woodlands Nature Station through a partnership between the Friends of Land Between the Lakes, USDA Forest Service, and American Eagle Foundation.

Last week, a team from the Woodlands Nature Station picked up the 7-year-old non-releasable bald eagle with a partial wing amputation resulting from a gunshot wound. She comes from Upstate New York along the St. Lawrence River and was given to the American Eagle Foundation last year. Her rescuers gave her the name Tahahente, a Native American name meaning “one who leads.”

Tahahente will fill the role left by Artemis, the 46-year-old female bald eagle who passed away last September of natural causes after being the Woodlands Nature Station’s eagle ambassador for 38 years. “Artemis taught over a half of a million visitors about her species over her time, we hope this new eagle will do the same,” said John Pollpeter, lead naturalist for the Woodlands Nature Station.

Land Between the Lakes has a decades-long history of bald eagle conservation and recovery, having released 44 eagles back into the wild in the 1980s and bringing this magnificent bird back to an area that hadn’t seen them in 40 years. “Even though bald eagles are heavily protected and had a remarkable comeback, poaching, lead poisoning, and habitat destruction can still be big factors in their continued recovery,” said Pollpeter.