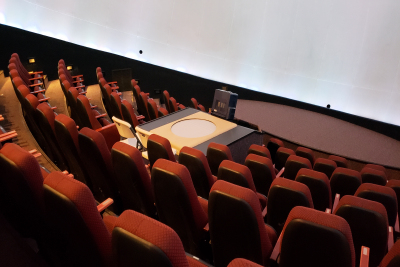 Earlier this year, Friends of Land Between The Lakes announced the Golden Pond Planetarium will be receiving a much-needed upgrade on its projector. The current projector has reached its end-of-life with replacement parts difficult to find.

Initially, Friends of LBL anticipated the projector to be ready by this month. However, the COVID-19 pandemic has caused delays.

Aviva Yasgur, Executive Director of Friends of LBL, gave us an update on the status of the new projector.

"The new system has been ordered, and it has been custom manufactured to fit the specific dimensions of the Planetarium. The current situation is that, because the manufacturer is located in France, there is a delay in actually installing the new system until the COVID-19-related travel ban between France and the United States is lifted,” Yasgur wrote to us in an email.

“This installation is a complicated process involving several days of technical work as well as user training. The company assures us that they are determined to install the new system as soon as possible once they are able to travel to the United States.”

Yasgur said the Golden Pond Planetarium is currently open with normal and holiday operating hours. However, once the projector and the crew to install the new system arrives, some short-term closures will be needed.

“We will continue to operate until the new system is installed as long as our current old system continues to function. There will most likely be a stretch of several days when the Planetarium will be closed during the installation.”

Yasgur also said she is thankful for all those who contributed to the project.

“Thank you again to the many generous donors who have made this possible."