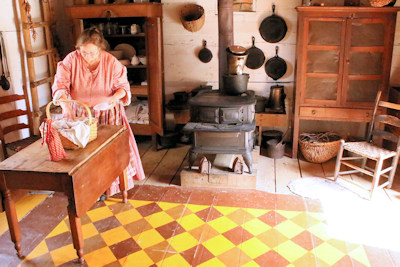 An interpreter working at the Homeplace 1850s last spring.

Over last weekend, Aviva Yasgur, Executive Director of Friends of Land Between The Lakes, sent an email to members of the organization with alarming news. Yasgur stated the popular Homeplace 1850s Living History Farm may be closed by the US Forest Service, who oversees the attraction in Land Between The Lakes.

Yasgur stated the US Forest Service has already laid off many employees at the Homeplace 1850s for 2021.

“Instead of the seven full-time Friends of LBL interpreters, the Forest Service plans to cut this number to only two interpreters. They also plan to get rid of most of the animals and crops,” wrote Yasgur.

“If significant sources of external assistance cannot be found, the Forest Service’s plan is to shut the Homeplace down permanently at the end of 2021,” Yasgur said.

The news created an uproar on social media with supporters of the Homeplace requesting people to call and email the US Forest Service. In an email to Explore Kentucky Lake yesterday afternoon, US Forest Service Public Affairs Officer Chris Joyner stated:

“Over a period of years we have discussed our budget challenges and its implications with Friends of Land Between the Lakes. In Fiscal Year 2018, our expenses for The Homeplace in Stewart County, Tenn. portion of LBL were $408,626 while revenue was $117,341.”

“We have an obligation to operate in a fiscally responsible manner. We plan to make adjustments in order to remain within our budget. We plan to adjust the number of interpreters at The Homeplace until we can find a new partner to help us manage the facility.”

“We are proposing that special programing such as the Pickin Party, Trades Fair, and Snap Apple continue. These changes will reduce the 2021 deficit by at least 50%. We are looking for a partner that can help us manage the facility consistent with the values of Stewart County, Tenn. and Land Between the Lakes in general.”

“We have already received new partnership interest and we are working to examine the best ways to continue to provide environmental education at The Homeplace.”

We asked Yasgur for a follow-up response.

“The Friends of LBL remains hopeful that a solution such as a new partner or other additional sources of funding can be found so that the Homeplace can remain open and continue to serve the public for many years into the future,” wrote Yasgur.

“We very much hope that this can become a reality. The Homeplace has been a valuable and beloved asset to families in the Kentucky Lake area, as well as to the tourism economy, for many years. We know that many people treasure the Homeplace and want their children and grandchildren to be able to experience and learn there just as they have done themselves.”

“We believe, however, that the public should know that as of March 2021, the Forest Service will be converting the Homeplace into what their plan calls a "Farm Museum," rather than its current status as a living history working farm. They have told us that the "adjustment" to staffing means a reduction from a staff of seven full-time interpreters to two full-time interpreters.”

“They have also told us that they plan to get rid of most of the animals and crops. Additionally, although the above statement says that the Forest Service will continue to operate the Homeplace with this reduced number of interpreters until they can find a partner, their published plan says that if they do not find such a partner by the fall of 2021, the Homeplace will not re-open in 2022.”

“We believe the public has a right to know that these are the contents of the document. We remain hopeful that a solution can be found, and that this does not happen. A major component of the mission of the Friends of LBL is to support environmental and cultural education for the public at LBL, and the Homeplace has been a big part of providing these experiences for visitors at LBL for decades.”