KET to Air Documentary on Construction of Lake Bridges 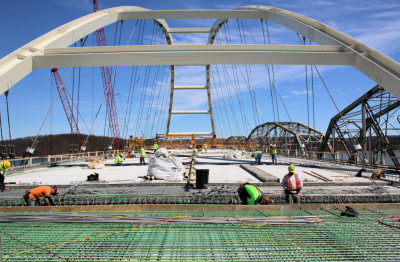 Crews work on the Eggners Ferry Bridge in April 2016. The old bridge is located at the right of the photo.

The landmark project to build two basket-handle arch bridges over Kentucky Lake and Lake Barkley is the subject of a new documentary that will premiere Sunday, July 12, on Kentucky Educational Television (KET).

Produced by Emmy-award winning filmmaker Mark Crowner of Louisville, the documentary looks back at the start of the project in 2007 when a series of public meetings allowed about 600 area residents to participate in selection of a design for the new bridges.

“Completion of the new bridges to carry U.S. 68 across the lakes that define the Land Between the Lakes was one of the most significant transportation projects ever undertaken in West Kentucky, and a milestone in the rich history of the Jackson Purchase,” said Gov. Andy Beshear.

Jim Gray, secretary of the Kentucky Transportation Cabinet, said the bridges brought more than just the obvious benefits of a modern highway corridor. “It was important that the bridges provide a signature gateway to the Jackson Purchase. And it was in that spirit that citizens of the area took part in selecting the basket-handle arch design,” Secretary Gray said.

The 30-minute documentary, which will premiere July 12 at 2 p.m. EDT on KET-HD, explores the challenges of simultaneously replacing two 1930s-era bridges spanning Kentucky Lake on the Tennessee River and Lake Barkley on the Cumberland River. The two bodies of water uniquely isolate the 170,000-acre Land Between the Lakes National Recreation Area. The new bridges are a vital link in the US-68/KY-80 corridor across southern Kentucky.

The U.S. 68 Eggners Ferry Bridge on Kentucky Lake opened to traffic in December 2015. The U.S. 68 Lake Barkley Bridge on Lake Barkley opened to traffic on February 12, 2018. The matching basket-handle arch design that came out of the extensive public participation process created a distinctive architectural and cultural statement at the eastern and western entrances of the Land Between the Lakes.

“Local businesses and residents are proud they now have a marquee pair of bridges to welcome the more than 1.5 million visitors who annually visit the Land Between the Lakes,” Crowner said. “The engineers and construction workers took great pride in their work, and are proud their children and grandchildren will have the opportunity to use the new, safer bridges. And the citizens were proud to know they had taken an active role in determining what those lake crossings would look like for perhaps the next 100 years.”

Each bridge has a multi-use trail for hike and bike traffic with a 9-mile-long trail connecting them through the Land Between The Lakes. When construction of a final 4-lane section of U.S. 68 is completed in central Trigg County, the trail will extend eastward to Cadiz.

KET has scheduled additional airings of the Lake Bridges documentary over about a two-week period on their various video platforms.

Premiere on KET-1 (the main HD channel) will be on Sunday, July 12th at 2 p.m.. EDT/1 p.m., CDT, with additional air dates to follow. Check the KET program schedule at www.ket.org.

The Lake Bridges of Western Kentucky PROMO is available at: https://vimeo.com/420394477