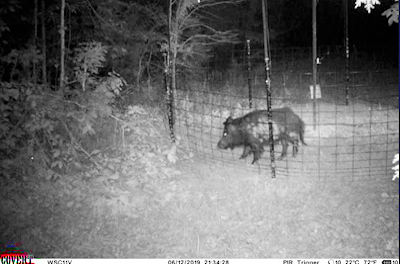 A collection of federal agencies recently completed the first round of 2020 feral hog eradication operations at Land Between the Lakes on Jan. 31. Officials have now added the use of helicopters in their fight against these invasive animals.

Partnering with the Animal and Plant Health Inspection Service, APHIS, the Forest Service organized an operation to shoot feral hogs from a helicopter beginning Jan. 27. The initial round of aerial operations was limited to portions of Land Between the Lakes south of the state line and west of The Trace. The project area was closed to the public during flight operations. Weather disrupted and reduced operations to three partial days of work ending on Jan. 31.

Wildlife specialists improved native wildlife habitat by euthanizing 197 feral hogs during this first round of operations. Federal officials will continue to target feral hogs using bait traps and other mechanisms to end feral hog habitat damage at Land Between the Lakes.

APHIS began assisting the Forest Service with trapping in 2014 with success but not at a rate that surpasses reproduction. In 2018, 70 feral hogs were euthanized by APHIS. In 2019, that number grew to 124. Feral hogs can have two litters each year averaging 5-10 piglets. Those offspring can give birth to a new generation in less-than a year.