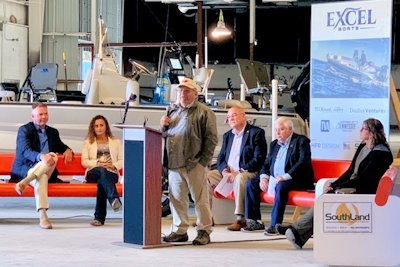 Glenn Foreman, owner of Excel Boats, speaks at the ceremony in Union City.

On Tuesday, October 22nd, Excel Boat Company of West Jordan, Utah, officially broke ground for their new manufacturing plant in Union City, Tenn. The plant is being built in what used to be the VF Outlet Mall. The 80,000 square foot building is being transformed into a manufacturing facility that will initially employ over 100 skilled workers, starting in the second quarter of 2020. The event was attended by around 200 representatives of Excel Boats, economic partners, local and state economic development partners, suppliers, and the public.

Glenn Foreman, owner of the parent company of Excel, Mud Buddy Motors, started the company in his garage when he built his first mud motor. A mud motor is a shallow drive motor used by waterfowl hunters and outdoorsmen who need the ability to navigate shallow, muddy areas.

Mud Buddy began buying boats from Rivertrail Boat company of Clinton, AR to pair with their motors. In 2009, a tornado destroyed the Rivertrail plant. Glenn Foreman bought the company after the storm and it became Excel Boat Company. Excel moved into the current plant location, a former shirt factory, in Mountain View, Ark. and began production. One of their top selling duck boat models is the F4, named after the F4 tornado that destroyed the previous plant.

Excel is currently ranked 10th out of 133 companies in the U.S. building aluminum boats. The new plant will boost production. Excel forecasts they will move to seventh in sales. They are one of the largest builders of aluminum Bay Boats, a type seen in coastal areas but also quickly gaining popularity on in-land lakes and rivers.

Excel will be introducing a new 19-foot bass boat to their line in time for the winter boat shows. The Union City facility will also be building a line of boats for Profile Boats, a company from New Zealand, which produces boats for coastal areas like the Pacific Northwest and Gulf Coast.

For videos of both the ceremony and the weekly “Catch and Release” Facebook Live events, go to Excel Boats Facebook page or excelboats.com.