Ham Fest: The Family that Cures Together... 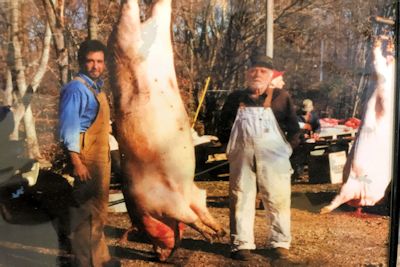 Pictured is the Adams family at a hog killing.

Jr. Adams can’t remember a year of his life that didn’t include a hog killing.

“When I was a baby, before I started to school, I went to hog killings and after I started school, they let us stay at home from school one day a year for the hog killings,” he says.

Jr.’s son, James Adams III, remembers the hog killing events of his youth, noting that he also has not missed a year of participating.

“It was more like a family get-together with all my grandparents, aunts, uncles and neighbors there,” he says.

“It was like a community gathering when we did it, and that was a really neat thing growing up.”

The Adams family has killed hogs and sold country hams as far back as either can remember, on both sides of their family. They are part of an age-old tradition in Trigg County, the annual production of country hams, celebrated annually with the Trigg County Country Ham Festival.

This year, both Jr. and James III will, once again, enter a ham in the Trigg County’s Best Country Ham Contest.

“I’m extremely proud of the fact that my uncle won the ham contest, my dad won it and I’ve won it,” Jr. says.

“Now we’re working it for my son. He’s gotten as high as second place, but he hasn’t won yet.” 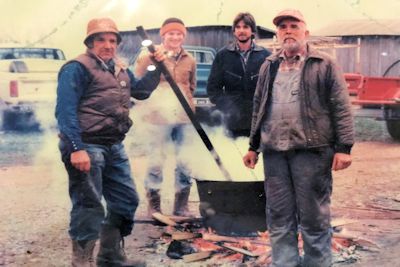 Pictured is the Adams family boiling at a hog killing.

The hams that the Adams pair will enter will have been on their farm for nearly a year before it goes to the Renaissance Stage in Downtown Cadiz for the contest winners’ announcement.

While the family no longer raises their own hogs, they are housed on their farms for a short while in November and December before the annual hog killing events where the Adams’s and their cousins kill between 60 and 70 hogs amongst the family. Immediately after, the hams are put in salt in the farm’s smokehouse and then smoked. They are not ready for sale until usually July each year, says Jr.

The pair is even passing the fine art of ham-curing down to James III’s daughter, Chloe. She participates through the Trigg County 4-H program in the ham curing project, entering her own ham in the youth Festival contest each year as well.

“Our family has been producing country hams for over 100 years,” Jr. says.

“I love the fact that we are continuing on.”

At the Festival, you can usually watch for one of the Adams family members to be called upon stage for the Ham Contest results, but you can almost always find them in the ham judging arena, talking to other producers and to friends and fans.

“I enjoy going up there and sitting around and talking to other farmers,” Jr. says.

“I usually walk down the street and get a blooming onion to eat.”

Ham Contest Winners are announced at 1:00 p.m. on Saturday, October 12 on the Renaissance Stage. For more information on the Ham Festival, visit GoCadiz.com.

Pictured is the Adams family boiling at a hog killing.