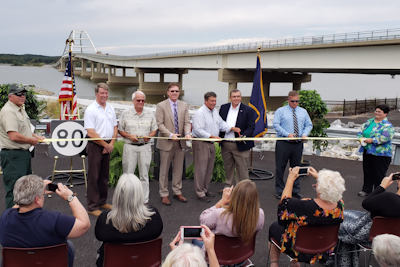 State and local officials and other dignitaries cut the ribbon of the new Lake Barkley bridge at Canton.

This afternoon several state and local officials were on hand along with contractors and residents to cut a ceremonial ribbon for the new Lake Barkley bridge at Canton.

The four-lane structure, with a multiuse trail on the south side, partially opened in early last year to allow the demolition of the old, narrow bridge that was originally built in 1932. Contractors finished the bridge earlier this month, with all four lanes of traffic and the new hike and bike path open to the public.

“The new bridge checks the boxes on our priorities to invest in safer ways to connect Kentuckians across all modes of transportation,” said keynote speaker and Deputy Transportation Secretary Paul Looney. “The multi-use trail provides a scenic and practical link for cyclists and pedestrians to use, and the new bridge doubles the capacity to carry traffic safely across Lake Barkley.”

A tourism attraction in its own right, the bridge features LED architectural lighting that illuminate the basket handle arch and trail. The 8.5-mile paved trail on the Canton-end of the bridge connects to its sister bridge - the Eggners Ferry Bridge in Aurora - that mirrors the same arch bridge design. The trail will eventually extend eastward along the new U.S. 68 corridor to the west edge of Cadiz.

The bridge is more than 10 football fields long, making it one of the longest in the state. In fact, the new bridge is about 700 feet longer than the old structure. With the bridge now complete, today’s ceremony marked the final chapter of the more than 20-year bridge project that first appeared in the state’s 1996 highway plan.

The former Henry R. Lawrence Memorial Bridge was named in honor of a local newspaper editor who long advocated for the construction of a new bridge to replace the ferry that connected Golden Pond and the “Between The Rivers” area to the rest of Trigg County. Opened in 1932, the original truss bridge featured a total of two, narrow lanes and no shoulders. The 86-year structure was demolished in April 2018 once two-way traffic opened on the new bridge.

The new bridge had a construction price tag of $128 million, which was awarded to PCL Civil Constructors of Denver in December 2014. 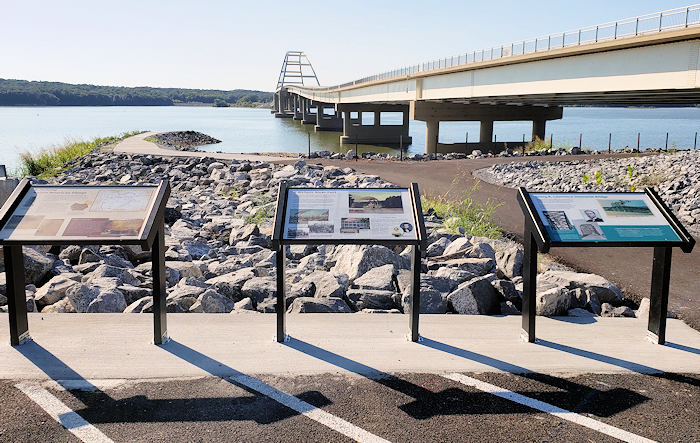 A view of the interpretive signs that highlights the history of Canton and the bridge site.