Trades Fair Coming to the Homeplace 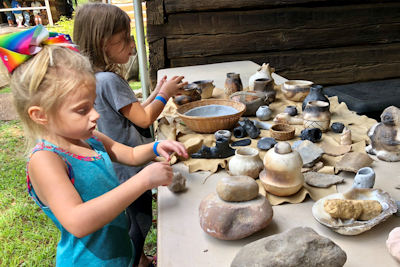 The popular Trades Fair at the Homeplace inside Land Between the Lakes will feature traditional trades and crafts. It is scheduled for Saturday, August 31, and Sunday, September 1, 10 am to 4 pm. Photo provided by James Sears-Rawlings.

The Friends of Land Between the Lakes invite you to the Homeplace 1850s Working Farm Trades Fair on Saturday, August 31, and Sunday, September 1, from 10 am to 4 pm, 4512 The Trace, Dover, TN 37058, inside Land Between the Lakes National Recreation Area. Traditional trades and crafts people will share knowledge of vanishing folk art skills. Admission is $5 ages 13 and older, $3 ages 5-12, and free for ages 4 and under.

When few things were manufactured, people relied on their skills, or their neighbors, to produce everything from knitted socks to horseshoes. Visit with local historical trades and crafts people as they share their skills and knowledge of these lost folk arts. Handcrafted items will be available for purchase.

Children can learn about the traditional arts and trades by participating in the Children’s Trades Fair. Families can pick up a booklet that helps their children to better understand life in the 1850s. Children may talk to trades and craft people to help them answer questions in the activity book or participate in an activity. This year children will learn about the 1850 communication trade, discovering how people communicated without smart phones and iPads.

Homeplace Lead Interpreter Cindy Earls said “The Homeplace Trades Fair is a wonderful family outing that has something for everyone. Discover life in the 1850s by learning about and trying the traditional handwork skills."

Trades and demonstrations will include:

The Homeplace staff will demonstrate broom making, flint knapping and
quilting. Land Between the Lakes Heritage staff will offer an archaeology activity.

Food will be available for purchase from Brandon Spring Group Center and the Hitching Post and Country Store will provide ice cream for purchase.