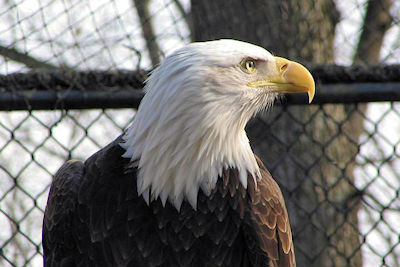 The bald eagle will be the first of many animal ambassador named at the Woodlands Nature Station inside Land Between the Lakes National Recreation Area. Photo provided by LBL.

“The educational animals at the Nature Station are native to the region and have been orphaned, injured, or confiscated by law enforcement and can no longer be released into the wild as their survival would be very poor,” says John Pollpeter, lead naturalist, Friends of Land Between the Lakes. “It has been a long-standing policy to not name the animals, as we always wanted the kids that visit to associate them as wild animals and not pets.”

Some recent research shows that nature centers and zoos can create stronger connections between people and wildlife by naming their animals. The goal is to reconnect with the outdoors and the creatures that live in our neighborhoods and farms. The 37+ year old, female bald eagle came to Nature Station in 1987. She was confiscated by the US Fish & Wildlife service from a person who was raising bald eagles for release incorrectly, thus she never learned the critical skills to survive and became imprinted. Eagles can live to 50 years in captivity.

The animal naming campaign will start with the resident bald eagle on July 4, Independence Day, and the final name reveal will be on July 20, 2019 - the fiftieth anniversary of the moon landing, where the famous phrase “the Eagle has landed” was the signature phrase of that monumental moment. Over the following year, Nature Station will name the female red wolf in October, groundhog in February, bobcat or “wildcat” during March Madness, and snapping turtles next July.

A separate campaign to name additional animals will be conducted with schools and other groups that attend nature programs at the Nature station in the upcoming school field trip season.

If you are interested in helping to name the bald eagle and other Nature Station animal ambassadors, you can go to the Woodlands Nature Station or Friends of Land Between the Lakes Facebook pages to give them your name suggestions, or later vote from a list of staff-selected favorites. Also, voting booths will be at the Golden Pond Visitor Center and Woodlands Nature station until July 19. The first round will be from July 4-July 11, then Nature Station will pick 5 favorites and have the public make the final vote July 12-July 19.

The Nature Station hosts 55 different species of rescued wildlife, giving the animals a forever home, while the animals help teach the public the importance of wildlife in our daily lives.