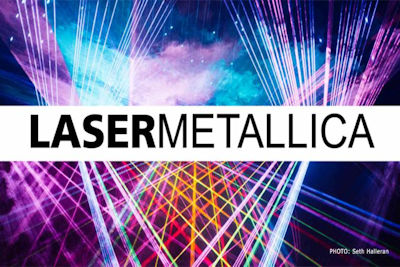 Laser Metallica has been added to the roster of laser shows featured at the Golden Pond Planetarium inside Land Between the Lakes this summer. Photo Credit: Seth Halleran.

The Friends of Land Between the Lakes invite you to an array of stellar evening shows for the 2019 summer season at the Golden Pond Planetarium and Observatory, 238 Visitor Center Drive, Golden Pond, Kentucky, 42211. Admission for laser shows is $8.

Laser and evening planetarium showings and Star Parties offer indoor and outdoor activities after 5pm starting in May and lasting all summer. The Planetarium offers evening Astronomy shows and the members of the West Kentucky Amateur Astronomers host Star Parties, weather permitting. Seasoned astronomers use telescopes to guide children and adults in observing the night sky. Observatory Star Parties follow the last show in the planetarium. Astronomy shows replace the 8 pm laser shows on Star Party evenings. Admission to astronomy shows is $6 for ages 13 and up; $3.50 for ages 5 - 12; and free for ages 4 and under.

The planetarium dazzles visitors with multi-colored laser light shows synchronized to popular music across the 40-foot dome. Featured artists include the Beatles, U2, Pink Floyd, Led Zeppelin and many more country and pop artists, including a new Metallica show.

Due to safety concerns, doors close after shows begin. Discount and Fun Cards are not accepted for laser shows. For a complete schedule of evening laser shows, see this link.