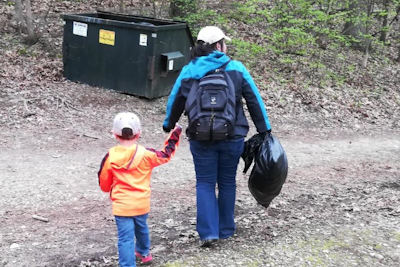 The Four Rivers District of the Boy Scouts of America recently removed trash from Land Between the Lakes as part of a service project. Photo provided by Friends of LBL.

Two hundred and thirty-eight Boy Scouts and Cub Scouts from Western Kentucky, Tennessee and Southern Illinois removed about one ton, or 2000 pounds, of litter from the shorelines of Land Between the Lakes on Saturday, April 13. Scouts from the Four Rivers District of the Boy Scouts of America performed this service project as part of their annual Conservation Day at Land Between the Lakes, which also included two nights of camping and outdoor skills activities.

The scouts worked with their troop leaders, as well as with leaders from the Friends of Land Between the Lakes and the USDA Forest Service, to focus their cleanup on four locations that had been impacted by flooding debris: Nickell Branch, Moss Creek, Demumbers Bay and Pisgah Point. When the lakes flooded earlier this winter, the high water deposited not only natural debris, such as driftwood, but also hundreds of pounds of bottles, cans and other types of litter. This and other volunteer shoreline cleanups at Land Between the Lakes are made possible with the support of TVA's Reservoir and Community Cleanups program.

Anita Spaulding, Volunteer Coordinator with the Friends of Land Between the Lakes, said, “We are so appreciative of the scouts for their great work removing so much litter from the environment. By cleaning up our shorelines here at Land Between the Lakes, the scouts helped keep 2000 pounds of garbage from ending up back in our waterways, as well as removed an ugly eyesore here in our campgrounds and hiking areas.”

For more information about the Four Rivers District of the Boy Scouts of America or how to get your child involved, visit their website at https://lhcbsa.org/council/four-rivers/.