The city of New Johnsonville, Tennessee, is a relatively young community, having built up shortly after the Tennessee Valley Authority dammed the Tennessee River in 1944 to create Kentucky Lake. The original town site, which was established around the time of the Civil War (1864-1944), built up around the Johnsonville Depot, which once served Union soldiers. After the War ended, the depot, complemented by the convenient location of the Tennessee River, proved to be a valuable tool for industries in Johnsonville.

Though the original land for Johnsonville is now almost completely under water, the addition of Kentucky Lake to this part of Tennessee has created several attractive fishing holes for visitors to the newer city site to enjoy. In fact, over the last fifty years, fishing has become a major attraction to the area and anglers enjoy fishing the shallow waters for a variety of regional fish that thrive in the waters of Kentucky Lake. 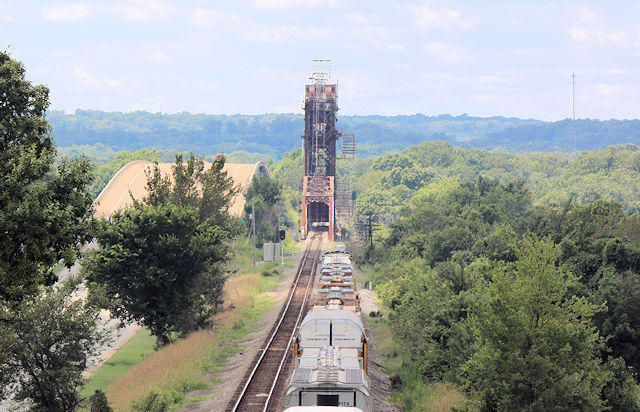 A train sits on a siding near the vertical lift bridge across Kentucky Lake at New Johnsonville, Tennessee.

Because the sections of Kentucky Lake located near New Johnsonville are more shallow than other parts of the lake, anglers have no trouble hooking a variety of fish, including smallmouth bass, largemouth bass, striped bass, sauger, crappie, bream and catfish. There are public shores where fishermen may cast their lines, as well as commercial marinas where anglers can rent boat slips and get out further into the waters of Kentucky Lake.

The history of New Johnsonville is quite fascinating to those who take the time to learn about the various stages of the community's history. The surrounding county is home to two state parks, which help tell the story of the residents who first came to this part of the country. The parks also serve to educate and commemorate the Civil War battles which took place here.

Johnsonville really began to develop around the time of the Civil War when the railroad made its way to this region of the country. Originally, a train depot designed to service the supply needs of the Union Army was finalized around 1863. The depot was attacked by Confederate General Nathan Bedford Forrest and his troops on November 4, 1864, during the Battle of Johnsonville. The battle was a short-lived victory for the rebel troops, however after the Civil War the depot proved a valuable asset for establishing a profitable shipping industry in Johnsonville.

Johnsonville State Park includes the remains of two earthen fortifications, as well as remnants of the original railroad bed and turntables that have been preserved throughout the park. Visitors can also view reproductions of the huts where the Union soldiers who set up camp along the shores of the Tennessee River would have lived until being overtaken by Forrest's armies. A living history event is held at the park in November each year, giving visitors an intimate look at what the Battle of Johnsonville would have been like for soldiers.

The lands where Johnsonville State Park sit today commemorate the history of the town, the Battle of Johnsonville and the heritage of the community that existed before the original site of the town of Johnsonville was flooded in 1944 to make way for the creation of Kentucky Lake.

The park is home to a welcome center that includes a museum which helps tell the story of the historic battle which took place here, as well as explains the significance of the Johnsonville Depot and the river's role in early 20th Century industry and transportation.

The park includes popular fishing spots and over 10 miles of hiking trails. Visitors can spend time exploring the African American Cemetery Loop and the Civil War Forts Trail. Bird watchers can view a number of birds in their natural environments, including gulls, sandpipers, woodpeckers, white-breasted nuthatches, and, sometimes, bald eagles. During the winter and migratory months, bay ducks and ring-tailed gulls also fill the park.

Home to a variety of natural wonders and historic events, Nathan Bedford Forrest State Park has a colorful history. Named for a rather controversial figure of the Civil War, Confederate General Nathan Bedford Forrest, the park was established during the Great Depression as a Works Progress Administration project. What began as a local park is now a designated state park where visitors can learn Civil War history, as well as indulge in the natural surroundings that attract fishermen, hikers and bird-watchers from all over the country.

The park is home to about 25 miles of hiking trails. Also housed there is the Tennessee River Folklife Center and Museum. The Center celebrates the culture and history of the region. Visitors will find much to learn about the various industries of Middle Tennessee, including musseling, regional crafts and commercial fishing. The center also features a variety of educational films and interpretive exhibitions that help explain the history of the park and its significance to the Civil War.

Those who would like to find Kentucky Lake cabins and lodging in New Johnsonville will find cabins and campsites at Nathan Bedford Forrest State Park.

While the community is small, there are a few diners and local restaurants in New Johnsonville where you'll find a delightful array of catfish, burgers and other favorite local dishes. If you're looking for a recommendation on a great pizzeria, reviews on Tripadvisor.com tout Skyway Pizza as the home to some of the best tasting pizza in town.

If you're looking to take part in a few things that only the locals are doing, then you'll enjoy a trek along the Eddie Lucas Memorial Walking Trail. Walkers and bicyclists can enjoy scenic river views during a casual, wooded stroll along this trail.

Slow Down and Sit for a Spell

Life in New Johnsonville can be as relaxing as you want it to be. Whether you're looking to get out on the waters and do some fishing or just want to soak up some Civil War history, you'll have a great time in this intriguing, Southern city. It's a community which invites weary city slickers to kick back and relax for a few days. Enjoy the slower pace of things and soak up the treasures that live and breath in New Johnsonville, Tennessee.

Lodging In & Around New Johnsonville

A Closer Look at the New Johnsonville Area

There are many things to do in and around New Johnsonville especially if you love the outdoors.  Fishing, boating, and other recreational opportunities are waiting for you.

For those considering relocating to the New Johnsonville area, you can get a closer look at the community and also take a look at New Johnsonville, Tennessee real estate agencies.