The End of an Era: 45-year-old Bald Eagle Passes at Woodlands Nature Station 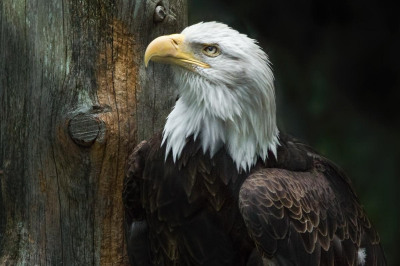 Artemis, the resident bald eagle at the Nature Station. Photo by Mel Cunningham.

The Woodlands Nature Station within Land Between the Lakes National Recreation Area is sad to announce that Artemis, the resident bald eagle at the facility, passed away due to natural causes on Tuesday, September 7, 2021 after 45 years of life and 34 years educating the general public.

During her time at Land Between the Lakes, she saw the populations of nesting bald eagles in LBL go from zero to almost one eagle nest per bay, the reintroduction of 44 eaglets released into Pryor Bay of LBL, and the delisting of bald eagles from the Endangered Species Act in 2007. During her time at Nature Station, she was able to educate over 1.5 million visitors about the importance of bald eagles as a top predator in Kentucky and Tennessee.

Originally born in captivity in Missouri, she was one of 80 eagles confiscated by the US Fish & Wildlife Service and had to be found a new educational home, as she was deemed non-releasable and had become imprinted on humans.

Though heart-broken to not be greeted by Artemis each day, the naturalists of the Woodlands Nature Station are happy Artemis had a long, healthy, and successful life as one of their best animal ambassadors. They would like to thank all the past and current Nature Station staff, veterinarians, commercial fisherman, bowfishermen, hunters, and volunteers who assisted in giving her a high quality of life. Artemis will be missed.

Though we will never truly be able to fill in her “talons,” we hope in the year to come to bring in the next generation of educational eagles for the future visitors to the Woodlands Nature Station.